January 13-April 22, 2018
Alsdorf Gallery
Mummy portrait (of a man with a wreath), wood, from Tebtunis, Fayum. Courtesy of the Phoebe A. Hearst Museum of Anthropology and the Regents of the University of California. (6-2378b)

The Block Museum of Art and the McCormick School of Engineering at Northwestern University delve into the art and science of ancient artifacts in  “Paint the Eyes Softer: Mummy Portraits from Roman Egypt. “Paint the Eyes Softer”  brings to Northwestern a series of mummy portraits produced in Egypt during the Roman period, a complete intact portrait mummy and other archeological finds from the Fayum region. Combining expertise from across the University — including contributions from classics, art history, sound design, materials science, medicine, archeology, art history and molecular biology — this groundbreaking installation explores how interdisciplinary partnerships can deliver new insights into ancient mysteries.

On view within the exhibition are a series of rare Roman-Egyptian funerary portraits. Painted on wooden panels between the first and third centuries CE in Egypt, these visages of the dead were originally secured over the face of the deceased within the mummy wrappings.

When these works were excavated at the beginning of the 20th century, they transformed the world with their immediacy, thought to reveal naturalistic, individual likenesses of people who lived 2,000 years ago. Some of the earliest portraits in existence, these paintings offer viewers a face-to-face encounter with the past. The words on one sketch board still bear personal instructions to an artist of an earlier millennium: “(paint the) eyes softer,” it indicates in Greek.

The majority of the objects on view at the Block, excavated from the site of Tebtunis (now Umm-el-, Egypt), are loans from the Phoebe A. Hearst Museum of Anthropology at the University of California, Berkeley. One of the largest collections of Roman portraits to have remained intact since excavation, they present a rare opportunity to study the material microhistory of painting tradition in a known context and to explore how ancient paintings were created.

In addition to the objects themselves, “Paint the Eyes Softer” foregrounds innovative techniques for the scientific study of objects. In recent years, the paintings have been the focus of a systematic study conducted by NU­ACCESS (Northwestern University/Art Institute of Chicago Center for Scientific Studies in the Arts) and UC Berkeley using a variety of imaging techniques. Recent scientific analysis conducted by NU-ACCESS has determined that some of the wood used in the creation of the panels was local, while some of it was brought in from the Balkans in southeastern Europe, opening interesting questions about local economies and long-distance trade. [Learn more about The Tebtunis Project]

Students enrolled in a Fall 2017 advanced undergraduate seminar worked with exhibition curators to continue the research of the NU-ACCESS project, combining materials science, archaeology and museum studies. Students conducted hands-on work in a laboratory environment to assess how ancient materials were made, used and buried and what this data means in a wider archaeological context.

The Tebtunis portraits are complemented within the exhibition by the intact mummy of a young girl from the collection of Garrett-Evangelical Theological Seminary on the Northwestern University campus. This complete mummy with a portrait embedded in its wrappings comes from the site of Hawara, a site close to Tebtunis in the Fayum region of Egypt.

The mummy, known as the Hibbard mummy or Hawara Portrait Mummy No. 4, is a portrait mummy of a young girl, approximately 5 years old. Acquired by the seminary in 2009, the mummy was previously loaned to the Metropolitan Museum of Art in New York in 2000 for an exhibit entitled "Ancient Faces: Mummy Portraits from Ancient Egypt." The Block Museum exhibition has provided a new opportunity to examine this artifact.

In August 2017, researchers worked with Northwestern University Feinberg School of Medicine to run a CT scan of the Hibbard mummy. The mummy was transported to Northwestern Memorial Hospital in downtown Chicago for the scan where scientists were seeking information regarding the cause of death, the diet and the method of mummy wrapping. The CT analysis revealed compelling areas for further inquiry, particularly highlighting the possibility of nonorganic material contained in the mummy’s wrappings and within the cranium. The mummy These findings allowed the joint engineering and biology research team from Northwestern to secure a visit to the Department of Energy’s Argonne National Laboratory in Lemont, Illinois. The Hibbard mummy became the first mummy to be analyzed using Advanced Photon Source synchrotron radiation. The high-brilliance X-ray beam has revealed more details about the specific non-organic materials located within the mummy wrappings.

Portrait of a Child is an illustrated guide to the fascinating story of the mummy known to archaeologists as “the Hawara Portrait Mummy No. 4.”

This book tells the story of what cutting-edge research has revealed about the life and death of the mummified child buried with a luminous painted portrait.  Accompanied by a wealth of color images, maps, and diagrams, Portrait of A Child, shares new scientific findings, as well as the conservation, ethical, and museological considerations weighed by the researchers and curators.

Written for the knowledgeable general reader, the book presents recent multidisciplinary research that explores the mummy, the economic and cultural history of Hawara within the Roman Empire, as well as the life of a girl in Egypt at the turn of the second century. 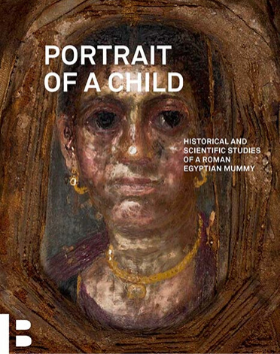 Portrait of a Child: Historical and Scientific Studies of a Roman Egyptian Mummy

Opening Conversation: Behind the Scenes of Roman Egyptian Mummy Portraiture from Block Museum on Vimeo.

The exhibition is organized by the Block Museum of Art at Northwestern University in collaboration with the McCormick School of Engineering, Weinberg College of Arts and Sciences and Feinberg School of Medicine.

Exhibition support for “Paint the Eyes Softer” is provided by the Barry and Mary Ann MacLean Fund for Art and Engineering, the Alumnae Continuing Education program funds of The Alumnae of Northwestern University, the Andrew W. Mellon Foundation, the Illinois Arts Council Agency, and the Alice Kaplan Institute for the Humanities. Additional support is provided by Block Museum Science and Technology Fund, Alsdorf Gallery at the Block Museum Fund and the Mary and Leigh Block Endowment. Exhibition sound design is thanks to Stephan Moore and students in the Sound Cultures seminar, Northwestern's School of Communication.

Opening Conversation: Behind the Scenes of Roman Egyptian Mummy Portraiture