Art, Publics, Politics: Legacies of the Wall of Respect

Art, Publics, Politics: Legacies of the Wall of Respect

Held at the Block Museum in conjunction with a student-curated exhibition We Are Revolutionaries: The Wall of Respect and Chicago's Mural Movement.

2017 marks the 50-year anniversary of the Wall of Respect, a mural of Black heroes and heroines painted “guerrilla-style” in 1967 by the Organization of Black American Culture on the wall of a decaying building on the South Side of Chicago. Although it existed for only a few years, the Wall of Respect helped set off a multiracial community mural movement that was active in Chicago and throughout the United States. Many of its characteristics—an assertive, pro-Black, grass-roots, collaborative project, intervening and making itself visible without authorization in public space—continue on in contemporary art and activist projects that appear on walls and in streets, as well as in social media and other virtual “spaces.”

“Art, Publics, Politics” brings together artists and scholars of the generations that followed the Wall of Respect to address connections—direct and indirect—between the Wall and their work or work they write and think about. We hope to have a vigorous discussion of ways in which contemporary art and activism continue to engage with the issues and strategies the Wall embodied—as well as ways in which they diverge.

The exhibition at the Block Museum of Art will be curated by students in a first-year seminar at Northwestern University, entitled “The Wall of Respect and Chicago’s Mural Movement.” Many events in the coming year, including an exhibition at the Chicago Cultural Center, a book due out in the fall, and other programs around the city, will commemorate the Wall of Respect in ways that honor its makers, its historical context, and the intellectual and political milieux of greatest relevance to its original existence.

“Art, Publics, Politics: Legacies of the Wall of Respect”

Presentations by Andres Hernandez on Historical F(r)ictions; Nicole Marroquin on Faheem Majeed; Andrew Schachman on The Floating Museum and sound and visual artist Damon Locks on working in past, present, and future tense, moderated by James Britt (Northwestern University).

Presentations by Marcus Sterling Alleyne on art and inspiration and Juarez Hawkins (Chicago State University) on being a Child of the Wall, moderated by Tempestt Hazel (Sixty Inches from Center).

Presentations by Alexis Salas on murals and street interventions in the Americas and Mechtild Widrich (School of the Art Institute of Chicago) on the international circulation of visual protest culture, moderated by Rebecca Zorach (Northwestern University).

Presentations by Desi Mundo (Community Rejuvenation Project) on Community Engagement vs Graffiti Abatement: Aerosol Murals in the 21st Century and Victoria Martinez on her urban installation experiments, moderated by Drea Howenstein (School of the Art Institute of Chicago).

Presentations by Cauleen Smith on the Procession of Black Love and For the People (FTP) Artist Collective on making movement art, moderated by Thomas Love (Northwestern University). 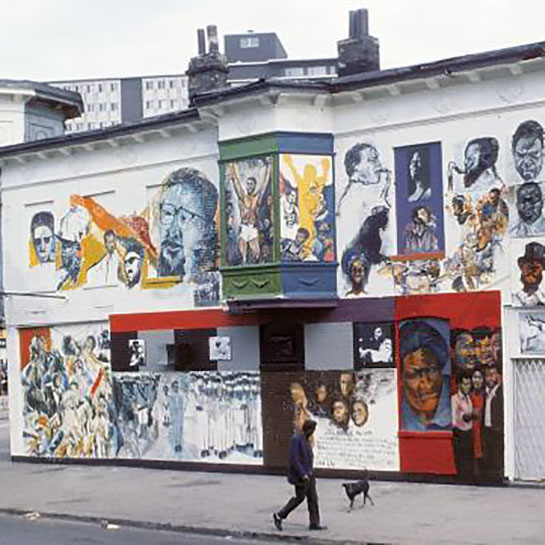 We Are Revolutionaries: The Wall of Respect and Chicago's Mural Movement

In 1967, the Organization of Black American Culture painted a huge mural “guerrilla-style” on the wall of a decaying building on the South Side of Chicago. They called it the Wall of Respect.

Details
April 21 - June 18, 2017We Are Revolutionaries: The Wall of Respect and Chicago's Mural Movement
Remote Access