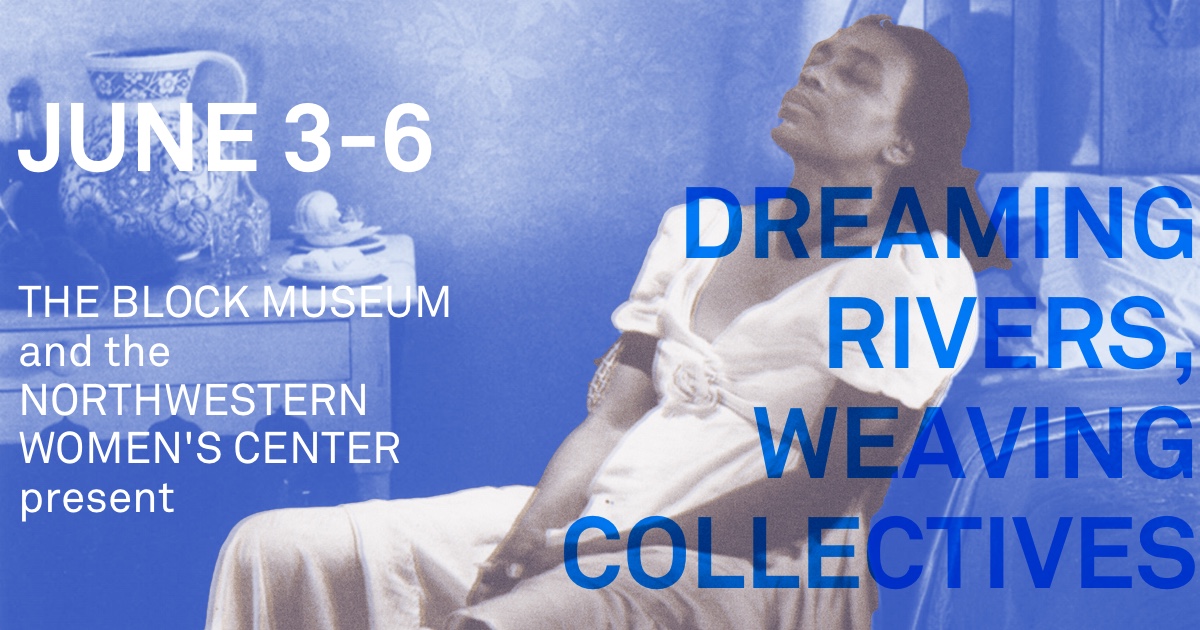 “Dreaming Rivers, Weaving Collectives” presents a short film from the visionary collective Sankofa Film and Video. Filmmaker Judah Attille joins LUX curatorial fellow Cairo Clarke and members of han heung 한흥 恨興 media collective in an intergenerational dialogue with members of contemporary film and media collectives in the US and UK. The program was curated by the Feminist-in-Residence at Northwestern’s Women’s Center Hankyeol Song.


Starting at 12 PM Central Time on June 3, Dreaming Rivers will stream for free on the Block’s Vimeo page for a period of three days. Scroll down to find the program on this page.

"Dreaming Rivers, Weaving Collectives" presents an intergenerational and transnational exploration of collective film workshops and the cultural politics of representation. Filmmaker Judah Attille will join LUX curatorial fellow Cairo Clarke and members of han heung in a recorded conversation about radical collective-building and resistance within and through media and cultural practice.

Sankofa Film and Video Collective was founded by Judah Attille and her contemporaries following the 1981 Brixton riots in the UK, to make critical interventions into Eurocentric film theory and practice. han heung takes inspiration from Sankofa’s legacy to study, critique, and apply similar collective interventions to current moving image practice.

Dreaming Rivers elaborates upon and transforms a discourse opened by Black UK film workshop Sankofa Film and Video Collective in their 1980s discussion series, “Black Women and Representation.” The three children of Miss T., a Black immigrant woman from the Caribbean, gather at her deathbed. The film figures their lives and identities in their late mother’s image, tracing fragmentation and difference across diasporic Black British subjectivities.

han-heung 한흥 恨興 media collective joins the program during their founding year as they build out their collective practice. han-heung is made up of film and media makers who meet to study radical histories and theories of media and culture. They intend to develop a revolutionary politic that is corrosive to auteur-, Euro-, and male-centric notions of media. The collective offers a space to craft tools and language for oppositional praxis.

Some of the founding members of han heung will join the conversation: Asuka Lin is a LA based filmmaker focused on unveiling patterns of symbiosis, hybrids, and contradictions within personal experiences. Charlotte Hong Bee Her 王碧荷 is a filmmaker and animation artist from Singapore whose work is haunted by the nonhuman. Hankyeol Song is a filmmaker, writer, and scholar experimenting with collective cultural praxis as a method of consciousness-raising. Merawi Gerima is a filmmaker from Washington DC with a community-based approach to storytelling. Youngbin Song is a filmmaker and graduate student interested in the role of digital media in transnational feminist movements.

Judah Attille is the writer and director of Dreaming Rivers, a Sankofa Film and Video Collective production. In the mid-1980s, Attille co-founded Sankofa F&V Collective with Maureen Blackwood, Robert Crusz, Isaac Julien, and Nadine Marsh-Edwards. Along with Blackwood, Marsh-Edwards, Women in Sync, and other British black women working in media, Attille organized the "Black Women and Representation Workshops" in 1984. The conversations and questions posed in this workshop led to the production of Dreaming Rivers, in which Attille worked with other visual practitioners, such as Sonia Boyce, to explore ideas of black female subjectivity in moving images that were not resolved intellectually.

Since her work on Dreaming Rivers, Attille has continued inquiry into formal questions of aesthetics, audience, and British Black female performativity. She is currently in the final year of her TECHE-funded doctoral project, "Africandescence: How does a Sankofa aesthetic function in a British black female reading of avant-garde films?" at the University of Arts, London. The practice-based research project argues for the expansion of considerations of the 'historical avant-garde’ in British film and the inclusion of women of African descent in this film history. Attille enters a cinematic dialogue with the text, Je suis Martiniquaise, by Lucie Combette (published under pseudonym Mayotte Capécia). This work experiments with the formal strategies of avant-garde aesthetics, narrative and cinematic time in considering themes of intimacy and sexual interdependency within a colonial socio-economic setting.

Cairo Clarke is a curator, and writer whose work is informed by slowness. Her work centers forms of knowledge production and dissemination that slip between the cracks, are formed on unstable ground, and take on multiple temporalities. Supporting strands of theorizing taking place in autonomous spaces and holding space for the mess.

Cairo has worked closely with artists to develop and share instances of work across film, performance, printed matter, and events as well as sharing self-led curatorial projects. In 2019 she launched SITE, a publication and curatorial project exploring alternative encounters with artist practice and the dissemination of research. Cairo is the 2020/21 Curatorial Fellow at LUX.

Co-presented by the Block Museum of Art with the Women’s Center at Northwestern University.