Free and Open to the public

Guru Dutt’s melancholy romantic drama is an icon of Hindi cinema’s golden age. Dutt, who counts among India’s greatest directors, also stars in the film as Vijay, a poor poet searching for recognition and respect. Set in Calcutta, the film considers the position of the creative underclass amidst postcolonial India’s uncompromising development agendas. The enigmatic Waheeda Rehman plays Gulabo, a sex worker who finds solace in Vijay’s poetry. Pyaasa also features some of Bollywood’s most enduring love songs, composed by S.D. Burman and Sahir Ludhianvi. (This series takes its title from a poem by Ludhianvi.)

In a new restoration from Ultra Media. In Hindi with English subtitles.

PART OF THE BLOCK CINEMA SERIES:
MORNING WILL COME: MODERNITY IN INDIAN CINEMA

India is home to the world’s most prolific and diverse film industries, and Bollywood movies, in particular, have found rapturous audiences from Russia to the Middle East. This series, presented as a complement to Modernisms: Iranian, Turkish, and Indian Highlights from NYU’s Abby Weed Grey Collection, features seminal classics of Indian cinema that have rarely been projected in the United States. In addition to landmark films by Guru Dutt, Ritwik Ghatak, and Mrinal Sen, which consider postcolonial conflicts between tradition and modernity, the series will also feature a program dedicated to the Shabistan Film Archive. 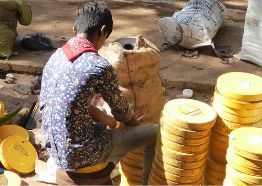 A Night with the Shabistan Film Archive